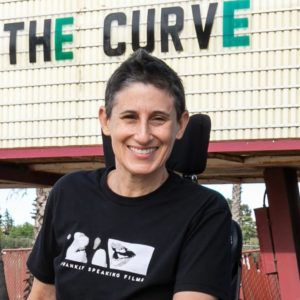 Franco Stevens is the founder of Curve magazine, the most successful lesbian magazine in the world. Growing up, Franco never saw any representation of queer women – she didn’t even know it was possible for a woman to be gay. When she realized she was a lesbian, it changed the course of her life. In 1990, Franco created a safe place for lesbians through the magazine,

raising lesbian visibility in a way that connected the community, positioned the lesbian market for advertisers, helped the community accept femme-identifying lesbians, changed the way lesbians are seen by the mainstream, highlighted the transgender experience, brought attention to lesbian families, raised awareness of attacks on LGBTQ rights, and amplified the work of queer women activists.

The magazine covered news, politics, entertainment, pop culture, style, and travel from a lesbian perspective, and helped build a foundation for many intersectional movements being led by today’s activists in the face of accelerating threats to the LGBTQ community.

In addition to being a pioneer in queer media, Franco has served on the board of directors for GLAAD, was a founding board member of the San Francisco LGBT Center, and has worked extensively to promote lesbian visibility and to educate media professionals on the lesbian market. Franco is the subject of the documentary, AHEAD OF THE CURVE.