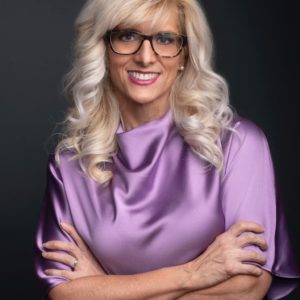 Diane Anderson-Minshall is a queer, Indigenous journalist, editor, author, and activist, who has received numerous awards for her work. She is the CEO and editorial director of Pride Media Inc., the largest publisher of LGBTQ-focused content in the United States, and all five of its brands: Out, The Advocate, Plus, Pride, and OutTraveler.

Diane is also the founder and CEO of Retrograde Communications, a modern editorial services and content development firm, which produces content and white label experiences for corporations, nonprofits, and destinations/tourism outlets.

Prior to her time with Pride Media, she spent nearly 20 years as editor of the two largest lesbian magazines in the country. For a decade, Diane was editor-in-chief of Curve magazine. She co-founded Girlfriends, the popular 1990s lesbian magazine, and Alice, the multicultural magazine for young women. She served as the president of the Board of Directors for Bitch magazine’s parent organization, Bitch Media, in 2009 and worked as a managing editor at On Our Backs magazine in the early ‘90s.

Diane and her husband Jacob co-authored the Blind Eye Detective Agency series and their memoir, Queerly Beloved: A Love Story across Genders. She also wrote the mystery novel Punishment With Kisses, and her work has appeared in dozens of anthologies (Reading The L Word, Bitchfest, Women of the Mean Streets).