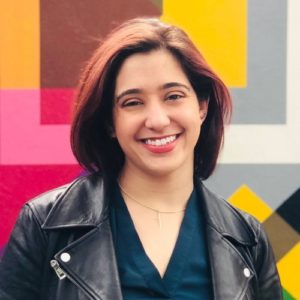 An unapologetic storyteller, fearless advocate for survivors of sexual assault and LGBTQ people of color, Andrea L. Pino-Silva is committed to bringing together grassroots organizing and radical storytelling to build intersectional and accessible social movements. With a background in movement building and digital communications, Andrea believes in the power of stories behind movements, and their unique power to mobilize “everyday activism.”

The daughter of Cuban refugees, Andrea attended The University of North Carolina at Chapel Hill as a first-generation college student, where she majored in Political Science and pursued research on the media framing of sexual violence, with a particular focus on LGBTQ and students of color. She is co-author of “We Believe You: Survivors of Campus Sexual Assault Speak Out,” and co-founder of the national survivor advocacy organization End Rape on Campus, where she worked for over five years to support students in learning their rights under Title IX, and in changing their campus sexual assault and harassment policies. Her activism and advocacy have been featured in the New York Times, Vogue, CNN, Good Morning America, as well as many other media outlets. She has appeared as a guest on The Melissa Harris-Perry Show, Bill Maher, and is a contributor to the Women’s Media Center and Huffpost. In 2013, she became the first student featured in The Chronicle of Higher Education’s Influence List and was listed on The Huffington Post’s most influential forces in higher education list. Her work and personal journey is prominently featured in the film THE HUNTING GROUND, which premiered at the 2015 Sundance Film Festival, and she appeared alongside Lady Gaga and 50 other survivors at the 2016 Academy Awards.