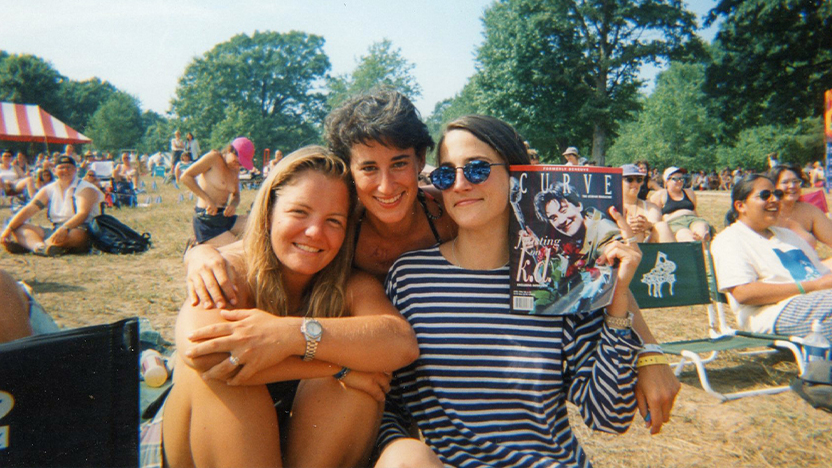 What made Curve magazine (first published in 1991 as Deneuve) ahead of its time wasn’t just the radical choice to boldly print “lesbian” on the cover next to out and proud figureheads such as Melissa Etheridge, Wanda Sykes and k.d. lang. Curve was filled with unapologetic images and stories that radiated community and dignity from cover to cover, quickly becoming a cornerstone of lesbian culture. So in 2019, when founder Franco Stevens heard that the magazine might go out of print, she was left with two questions: Was a lesbian magazine still important for lesbian visibility? And, how had visibility changed over three decades?

In AHEAD OF THE CURVE, filmmakers Jen Rainin & Rivkah Beth Medow craft a personal journey that follows Stevens’ process grappling with questions of community and legacy. Linking lesbian histories with contemporary viewpoints, the film moves between interviews with LGBTQ+ tastemakers, “celesbians” (including Jewelle Gomez, Kate Kendell, and Lea DeLaria) and rich archival footage. Rainin lovingly uplifts the personal and political struggles, adventure, and community that birthed an institution, honoring its visionary legacy while exploring whether a groundbreaking print publication remains relevant in a digital age. AHEAD OF THE CURVE premiered as part of the Frameline44 Pride Showcase.
—SOPHIA LANZA-WEIL

The Curve Foundation will give voice to, validate, and preserve the experiences and stories of the lesbians, queer women, trans women, and non-binary people of all races and ages who make up the Curve Community…

Wolfe Video has announced today the release date for the documentary feature Ahead of the Curve, directed by Jen Rainin and Rivkah Beth Medow.